It's a Blue Sky Don't Hold No Rain

from Live In Session Spring 2009 by Alchemeon 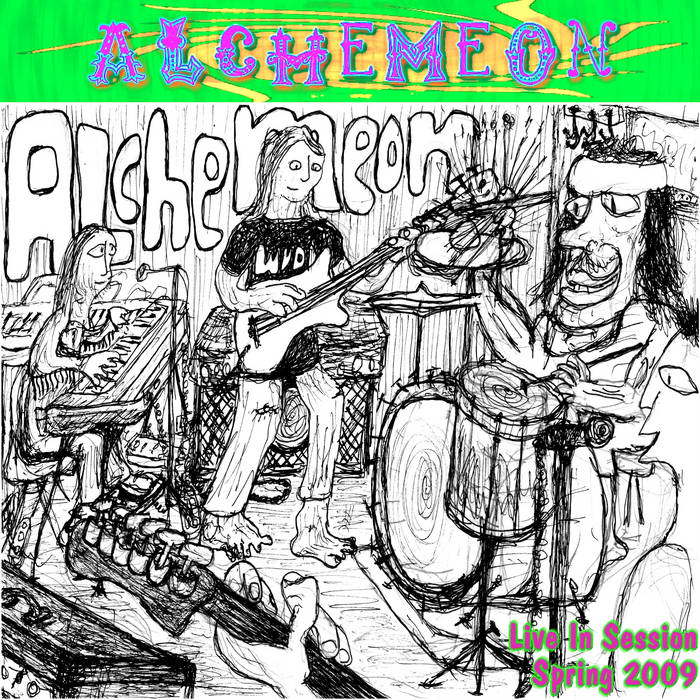 It's a Blue Sky Don't Hold No Rain by Alchemeon, from Alchemeon Live In Session Spring 2009.

Jim takes the lead vocal at the start of this song. A little later on, there is a moment of comedy.

At about 5.20, when the vocals come back in again, Jim's lyric sheet makes a sudden leap for freedom. He manages to grab it in mid-air before it escapes. You can hear the "glorch!" of the keys as some part of his anatomy comes into contact with them when he goes for the grab, the little giggle when he catches the sheet, and the mumbulated lyrics as he tries to unfold the paper with one hand while playing the keys with the other.

* It’s a Blue Sky Don’t Hold No Rain was one of the very first songs that Pok ever wrote.
* There are probably not many 17-year-olds who would write such a thoughtful lyric as this.
* Pok once described the song as being about “the loss by genocide of the native Americans and general early eco lament directive for that generation.”
* He also said that the original idea for it came from listening to Neil Young.
* The very first time we heard this was when it was played by Pok on a 12-string acoustic with only six strings, as he sat on a bench along a footpath in the dark in Honiton late one evening.
* Its first proper live performance was at the Sidmouth International Folk Festival in the summer of 1983.
* It’s a Blue Sky Don’t Hold No Rain has been performed by Laughing Sun and the Spacegoats previously to Alchemeon performing it and you can hear their versions at Bandcamp, SoundCloud and the Wud Records website.
* A studio version of it is in the works and will appear on Pok’s Anthology album when it is finished.
* One of the most definitve moments of the song are the three riffs that are repeated during the instrumental section.
* These can be heard as far back as Laughing Sun’s Cander recording, with Ken redoubtably bashing out the Em7 – A7 rhythm on the acoustic in the background.
* In earlier versions of the song these riffs were repeated four times each, but Alchemeon chose to repeat them only twice.
* It’s a Blue Sky Don’t Hold No Rain is in the key of E minor and begins and ends with a big glorious Em7 chord.
* The chords in the verses are Em7 – Am7 – C/G – B11#9.
* There is a rather wonderful key change in the “What have we done” section, which is C7 – D7 – Gm7 – D7 – Am – C/G – Em7.

Some time ago the white man came
Bringing bible books and swords
Bound them up in twining cords
In the name of their great lord
They slew down the Aztec, Inca, Ibu, Masai
Now we hide in concrete lies
So to my Mammon side I cry:

"What have we done
To the Mother Goddess Gaia?
Why can’t we nestle in her
Warm aching bosom?"

Now the world’s a spinning ball
Two thirds with none to eat
So while we chew our scrawny meat
Can you hear those big bells beat?

What have we done
To the Mother Goddess Gaia?
Why can’t we nestle in her
Warm aching bosom?

This version recorded live at Sound Gallery, Exeter, 22nd February 2009.
Cassette salvage and remastering at Wud Records Studio One, 2020.

Featured sounds from Fly Lo and Ahmed Idris, plus Mother Nature hops on to drop off new project